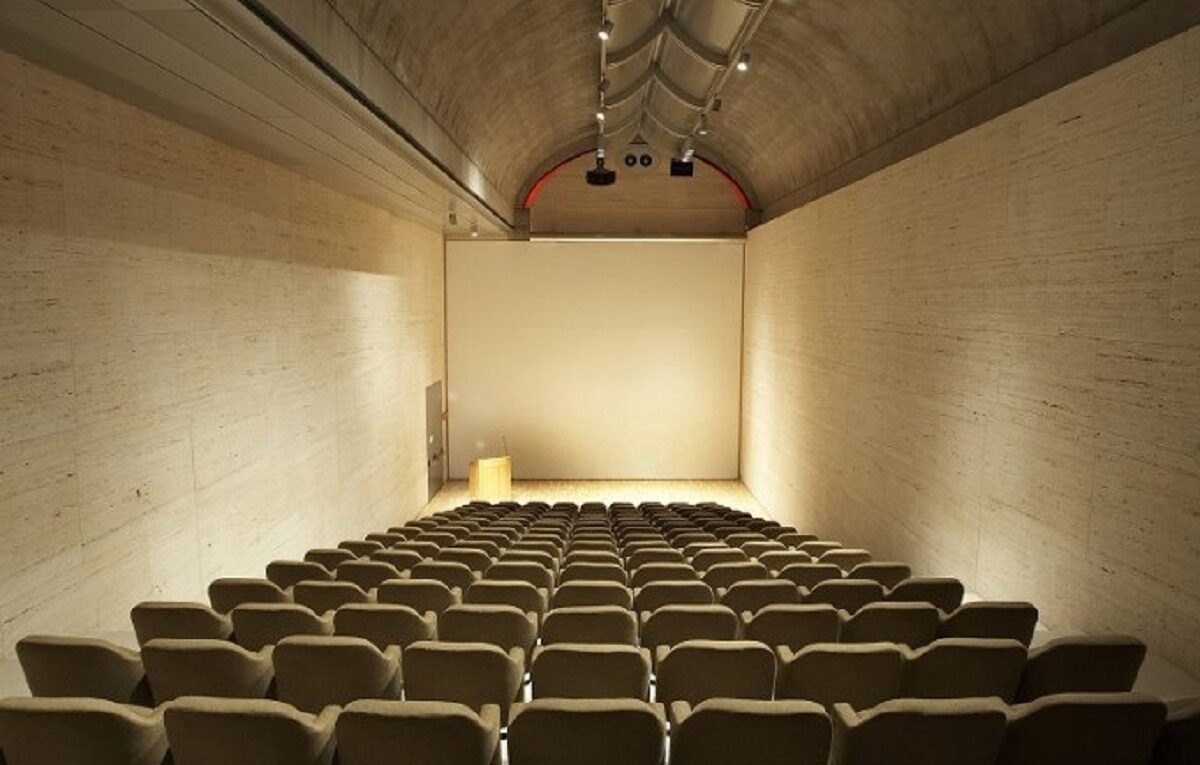 One of the most unique and unusual auditoriums in Fort Worth is often open to the public for showings of films that you might not otherwise see. While many of these films are as entertaining as they are educational, there’s no doubt that you can learn a lot about art and the culture that surrounds many of the Kimbell Art Museum’s exhibitions by attending some of these films.

The auditorium of the Kimbell’s Kahn building is put to use many Sundays at 2 p.m. showing films that in some way relate to what’s happening at this respected Fort Worth museum. An added bonus is the opportunity to see the unusual and unusually comfortable deep and narrow auditorium that’s behind closed doors most other times.

[This article appeared on my Fort Worth Secrets website, a project that is now discontinued. It was published in September 2016.]

About Free Films At The Kimbell

There’s a lot to like about the Kimbell Art Museum in general. It starts with the Louis Kahn building. Completed in 1972, it’s widely regarded as Fort Worth’s architectural crowning jewel. When you consider it today alongside the understated but also masterful Piano Pavilion, added next door in 2013, it stands out all the more.

And according to what I’ve seen and read, that was the intent. Adding the Piano Pavilion focuses more attention on the beauty of the Kahn building and allows visitors without ability issues to easily reach the front door of the Kimbell for the first time. Visitor have been entering the Kahn building through a back door in the basement for decades.

Visting the Kimbell to see a free film allows you the opportunity to study the unique vaulted design of the Kahn building, which consists of six sections of vaulted ceiling with thin skylights where they join the walls that allow in natural light. The north portion of the easternmost of these vaulted rooms is the Kahn Auditorium. With terraced seating that descends into what should be part of the basement, the room is stark and cold-feeling but somehow seems the perfect plain backdrop for a film about art.

Seeing A Film At The Kimbell

Films are often planned to coincide with special exhibits at the Kimbell. They may include documentaries that examine the surrounding culture, fiction movies based on the times or circumstances depicted in exhibits or specific examinations of works, artists or periods. If it somehow related to something at the Kimbell, it’s fair game for the Sunday afternoon movies.

You’ll notice several things when you enter the auditorium. The first is that the room is long, narrow and deep, a shape that’s unusual. You’ll also notice as you choose a place to sit that the auditorium features individual bucket seats, another rarity. If you look carefully, you’ll see that the skylight area similar to those where natural light comes into the galleries of the Kimbell is awkwardly filled in with red to keep the sun out in the auditorium, adding a splash of color to a building that has very little.

I’m never pleased with the brightness and image quality of the films, perhaps because I’m used to the glowing and intense picture quality at the nearby Modern Art Museum and at today’s digital movie theaters. I’ve actually asked the Kimbell about this more than once and my inquiry has resulted in some bulbs being replaced, but you may still be dissatisfied with the brightness and quality, especially when artwork and other images meant to be carefully examined are being shown. But remember, the presentations are free.

Most of the films shown are available on DVD, so you could order them and watch them at home. But seeing a film with other art lovers in one of the most beautiful buildings in town is an experience you shouldn’t miss. And it’s a pleasant way to spend a Sunday afternoon.

Films at the Kimbell